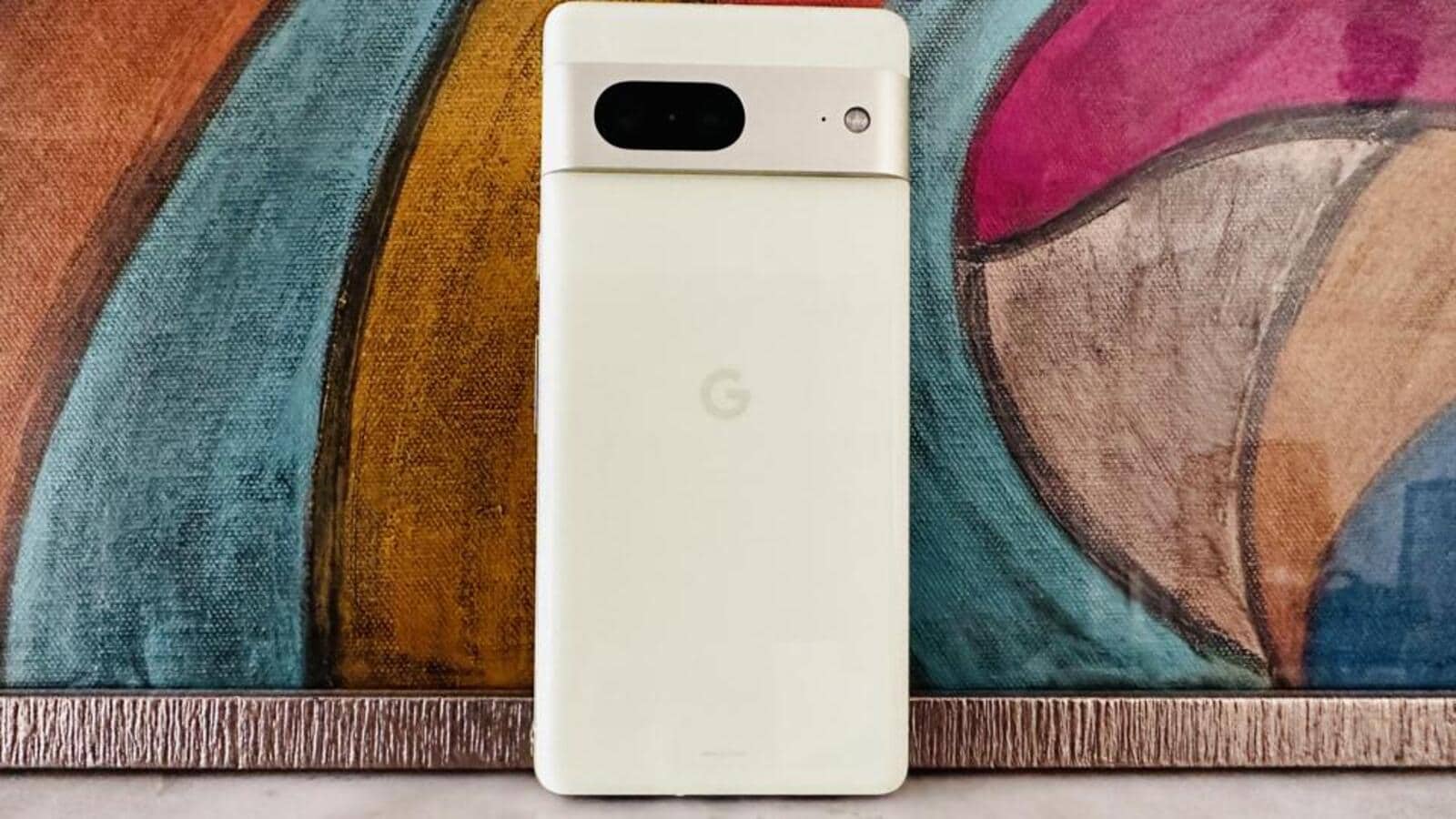 Google appears to have re-found its focus for the Indian market. While the launch of the Pixel 6a a few months ago may now feel mistimed, amidst the wider picture, the company now has the full spectrum of Pixel phones on sale here. The new Pixel 7, Pixel 7 Pro and Pixel 6a make it a troika that’s now ticking off three very different use cases, and price points.

It is the Pixel 7, with its form factor and footprint, which will probably have wider appeal. That, and the price tag too. More expensive than the Pixel 6a, while offering a slightly bigger display. And not exactly a compromise when compared with the pricier Pixel 7 Pro. It is, as they say, almost the perfect balance.

The Google Pixel 7 is priced at ₹59,999. Not onwards. Just. That’s because there is a grand total of one spec that is on sale here. That’s with 128GB storage. The power comes from the newest generation Google Tensor G2 chip, 8GB RAM (the Pixel 7 Pro has 12GB RAM) and a 6.3-inch AMOLED display.

As far as the competition landscape goes, the Pixel 7 isn’t in for an easy ride. There’s the Samsung Galaxy S22 (priced around ₹62,999) and OnePlus 10 Pro 5G (around ₹61,999; if you are okay with a larger phone). Factor in the cashbacks – it can come to ₹6,000 on Pixel 7 – and other credit card discounts that you may be eligible for, there is the sense that this phone is well placed in terms of price.

What about the new Tensor chip?

There are reasons why Google has made the definite switch to its own silicon, much like Apple has. It mostly has to do with the software side of things, the algorithms and machine learning smarts that can therefore be better optimized in a close-knit ecosystem, compared with an off-the-shelf solution bought from Qualcomm or MediaTek.

The Tensor G2, compared with last year’s Tensor, has core upgrades and completely new graphics. The improvements aren’t exactly tuned for raw performance (the Pixel 7 is fast enough to sit comfortably in the flagship category), but to make machine learning tasks faster. Voice message transcription, for instance, which is now a feature in Google Messages app – any voice message received in the app can be transcribed on device — means you don’t have to actually listen to the message. We still haven’t had a chance to test the feature (it arrives in an update soon), but the utility will be truly utilized when apps including WhatsApp are able to use this feature.

There are nifty features in the Pixel phones, which most other Android phones don’t have. For instance, you can identify a music track that may be playing somewhere around you, without having to open an app specifically for it. In our experience, in noisy environments, it has a better success rate than Shazam.

And this is before you get to the camera smarts.

The Pixel 7 gets a 12-megapixel ultrawide camera alongside the primary 50-megapixel main sensor. A dual camera setup, instead of a triple camera implementation – that’s the differentiation between this and the Pro option. A first glance at the spec sheet will probably indicate that not much has changed in a year. But just numbers tell half the tale, in this instance. Also, this phone is in no way a step back from the more illustrious Pro sibling – it is the same 50-megapixel sensor that you’re working with here as well.

It is very clear from the outset that with the Pixel 7, you are getting the traditional bucket of brilliance with photography. Albeit improved, with the updated hardware, further optimizations, and the smarts that Google Photos’ extensive editing modes have imbibed over time (A Google One subscription will help unlock everything that’s available).

There is also the updated (and results tell us much better) methodology of 2X zoom, which now generates a 12.5-megapixel image by using the centre of the primary 50-megapixel sensor. The results are impressive, because of the combined efforts of software smarts and the way zoom now works. There is more data to work with, which negates the zoom’s usual foibles of distortion and loss of detail. There’s up to 8x zoom, at the tap of the finger.

Cinematic Blur is the new video mode that the Pixel 7 is ever willing to show off. To be fair, the Apple iPhone has had the Cinematic video mode for a while now – but then again, it is understandable that Google took their time to ensure they were fine with the final results, before rolling it out. You may end up using this mode more than you’d initially expect because the automatic blurring of the background makes for pretty viewing.

While there is absolutely no doubt that the updated combination of the hardware and software has taken the Pixel phones a step forward within the already robust photography performance space, the software adds another layer. And that’s probably Google’s secret sauce. Photo Unblur, for instance, is really handy if you’ve taken a photo of a hyperactive kid and the final image is a tad blurred because of the sudden movement of the subject. Portrait is another option which can effectively blur the background in photos while keeping the subject well in focus. It is quite accurate too, around hair and apparel too.

What do we say about Magic Erase, that hasn’t already been said?

Ergonomics and design: Everything is to hand, easily

Just like the more expensive sibling, the Google Pixel 7 Pro, the Pixel 7 also is an evolution on the design front rather than a revolution, with wholesale changes. In fact, this is less tall and less wide than last year’s Pixel 6. It may just be a few millimetres either way, but every millimetre does make a difference.

There’s the Corning Gorilla Glass Victus at the front and the back of both phones. There’s IP68 water resistance, and the frame of the phone is aluminium in a matte finish.

The Pixel 7 colour options include Lemongrass, which is another rather nice-looking shade of green. Albeit a bit brighter than the Pixel 7 Pro’s Hazel. There’s also Snow (white, in case you missed it) and Obsidian (quite a complex name for black?).

For a phone with a 6.3-inch display, the Google Pixel 7 is incredibly comfortable to hold. And feels very light too. At least compared with what’s become the trend with smartphones in this era.

But what about the battery life?

Weight saving elsewhere also sees 10 grams shaved off on the tipping scales. That is also a direct result of the battery capacity that’s been reduced – it is now 4355 mAh compared with 4614 mAh before. We do not have any experience with the Pixel 6 and the battery stamina it delivered with the Google Tensor chip – yet the Pixel 7’s combination of the Tensor G2 chip (alongside its optimizations) and software improvements cannot be discounted.

Google insists that when used normally, the Pixel 7 will last more than 24 hours on a single charge. In our experience, a fully charged Pixel 7 at 8am is down to around 22% battery by 8pm. That’s not bad, and definitely not battery anxiety stuff, but you do need to be careful about leaving apps open carelessly in the background.

In this day and age, the lack of truly fast charging is perplexing. The wired maximum speed the Pixel 7 can do is 30-watts. That means a fully discharged Pixel 7 will do a 50% charge within 30 minutes of being plugged in. Yet, this is definitely not the outlier in the smartphone ecosystem.

Undoubtedly, the Pixel 7 puts on a strong show

And a final word

If you’re in the market for either the Samsung Galaxy S22 or the OnePlus 10 Pro 5G (or a lesser priced phone; we’d recommend considering spending a bit more), there is now the Pixel 7 that you must consider. It isn’t perfect, much like any piece of technology. The fast charging isn’t as fast as a few rivals. The face unlock mechanism is perplexingly not as secure as it should be.

You’ll need to come to terms with the FHD+ display with the 90Hz maximum refresh rate. This is slightly more than the Galaxy S22, but the OnePlus 10 Pro goes much denser. Also, the Galaxy S22 gets the 120Hz refresh rate, which is a simple case of more being better, for visual fluidity.

But then again, this is the true Android phone, as pure as it is meant to be. In that scope, most phones cannot do photography as well as the Google Pixel 7 can, when the Google Photos smarts are added in. Battery life is consistent, and it is a really good display to look at. At no point did the Pixel 7 ever feel like wanting more power. The bonus here is, the little additions to the software — music detection, message and audio recorder transcriptions and call captions — that just make the entire experience smarter.

Isn’t that the real value addition with smartphones now since they are all so similar otherwise?