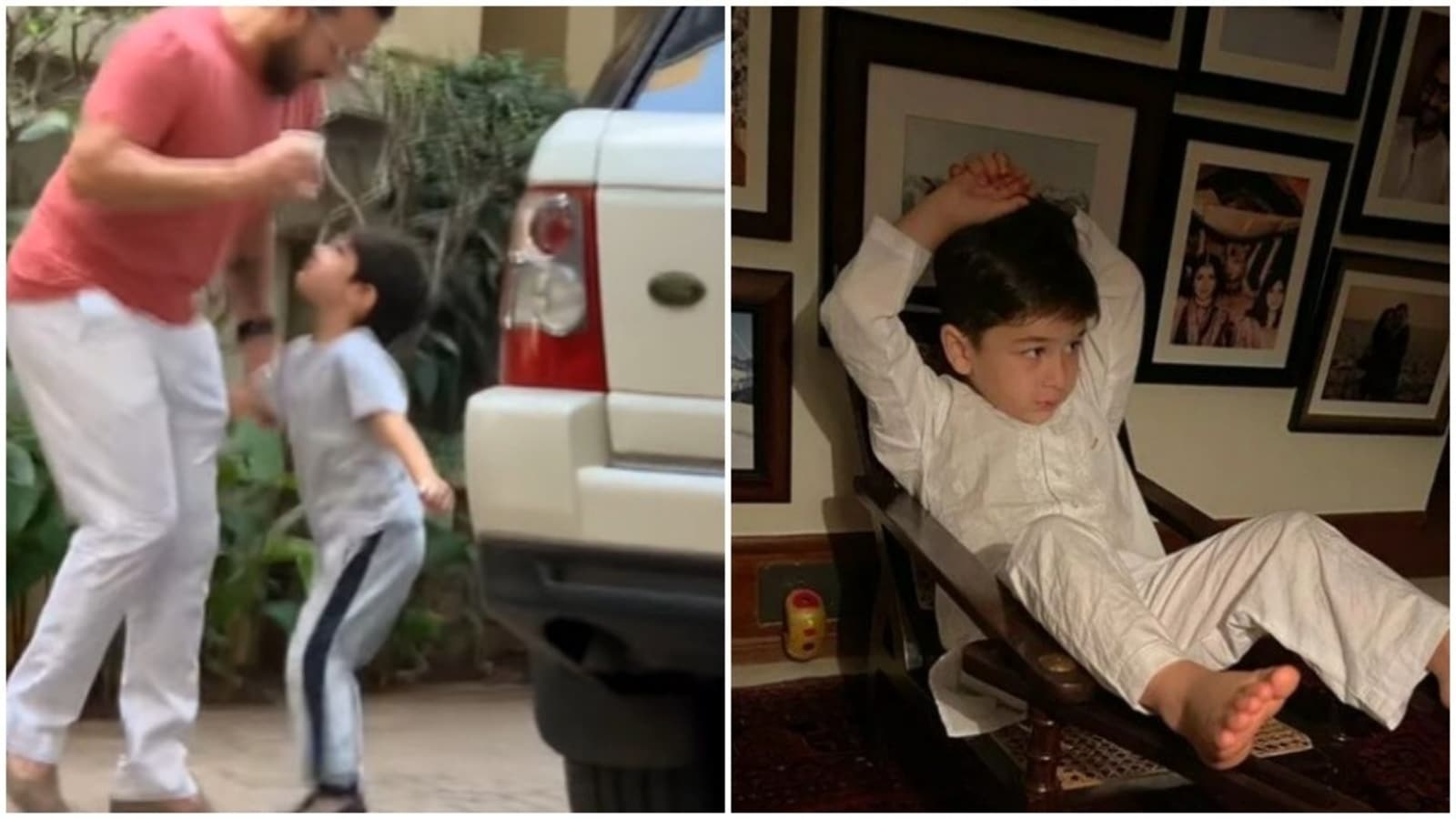 
Taimur Ali Khan‘s recent interaction with his father Saif Ali Khan has amused Instagram users. In a new video captured by the paparazzi, Taimur was seen taking a swing at Saif as they argued about something after stepping out of their car. Taimur, whose pictures and videos often go viral on social media, prompted Instagram users to call him “nawaab sahab” with his gesture. Also Read: Saif Ali Khan poses with Jeh in Sara’s arms and Taimur on Ibrahim’s shoulders, Kareena Kapoor says ‘one for the album’

In the video, Taimur is seen gesturing his hands upwards as he talks to Saif Ali Khan, who has a beverage in his hand. The five-year-old, who was dressed in a grey T-shirt and track pants, goes on to whack his father who steps back in reflex. Saif, who was sporting a rust T-shirt with white pants, was seen laughing at his son’s antics before they proceeded to walk towards their house.

Instagram users reacted with laughing emojis at Taimur’s exchange with his father and called him “cute.” One wrote, “Nawab saahab ka ghussa (The nawab’s temper),” adding a fire emoji. Meanwhile, several defended Taimur from criticism that he is pampered or misbehaved.

“Sab bache aisa hi kartein any big deal leave them alone (All children behave like that, it’s no big deal. Leave them alone),” one wrote. Another commented, “All the children do that when angry, my niece does that too so please don’t judge him so harshly.”

Taimur was also clicked by paparazzi earlier in the day during an outing with his parents Saif and Kareena Kapoor. The family had a crowd of children waiting for them as they stepped out of a cafe, and Saif and Kareena obliged by posing for selfies with them. Taimur, who was sitting in the car with a phone in his hand, looked at the crowd with a confused expression on his face. Read More: Kareena-Saif pose for selfies with fans outside cafe, Taimur looks on. Watch

Meanwhile, Taimur’s aunt Saba Ali Khan also shared a picture of him that has been receiving praises from his fans. The picture showed Taimur, who was dressed in a white kurta and pajama, lounging on an armchair in front of a photo wall. Saba captioned it, My boys….Chote Nawab…..Mahsha’Allah…Lounging like a royal …na ?”