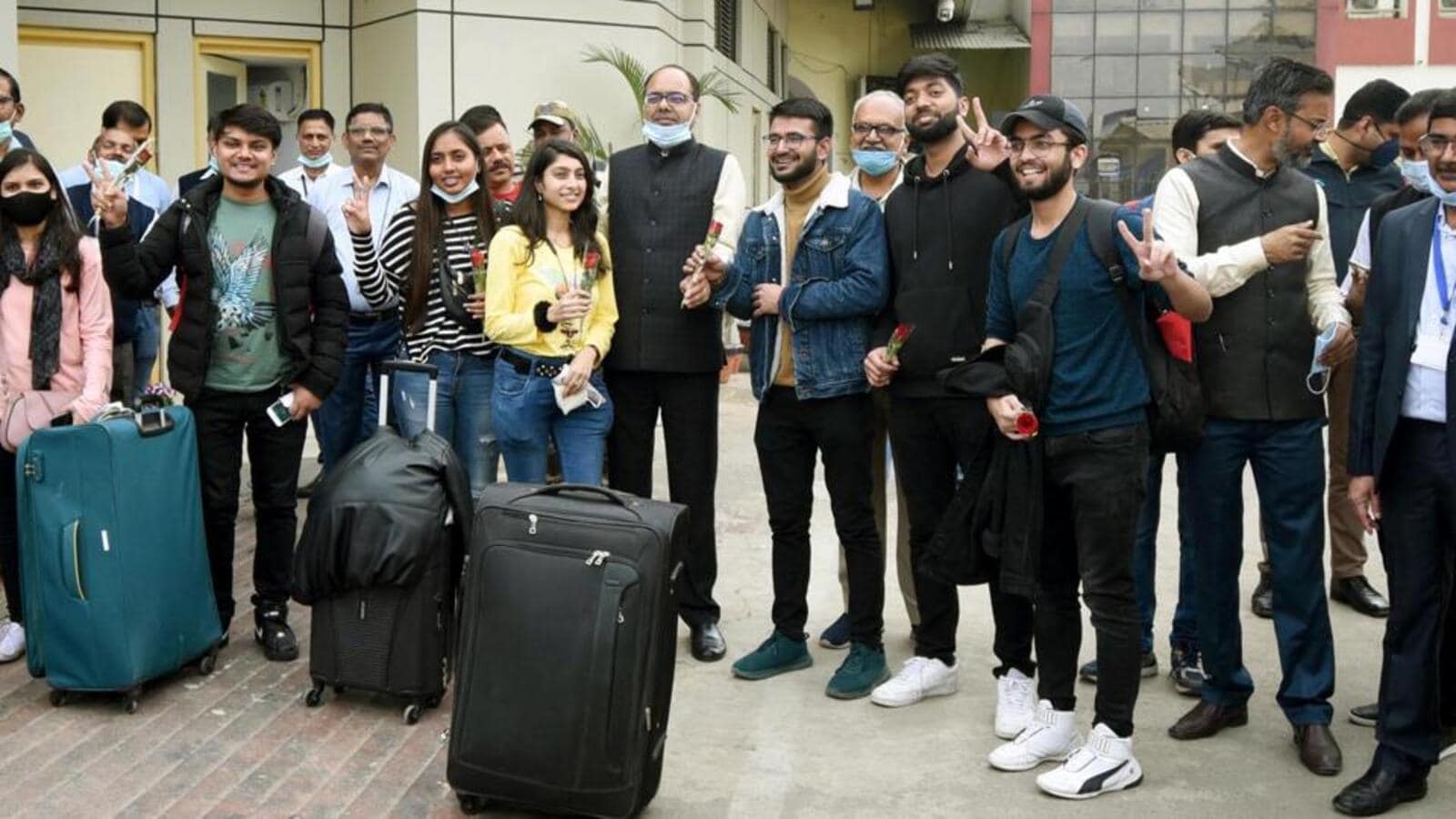 
India on Sunday conveyed its concerns about the safety of Indian nationals to both Russia and Ukraine, even as efforts were stepped up to get more citizens out of the war-torn country and to ensure the security of those caught in conflict zones.

The Indian government has so far got some 2,000 nationals out of Ukraine, and 1,000 of them have been flown back on chartered flights from Hungary and Romania. However, Indians who moved to the border with Poland faced problems and long delays in crossing over as the check point was clogged by hundreds of thousands of people fleeing the fighting.

Foreign secretary Harsh Shringla told a media briefing he had called in the envoys of Russia and Ukraine separately and “conveyed to them our deep concerns on the safety and security of Indian citizens, particularly students based in Ukraine”. The Indian side shared locations where its nationals are concentrated for “ensuring their protection”.

Both envoys assured Shringla they are “very cognisant of the safety and security of Indians in a conflict zone”, the foreign secretary said.

India’s permanent representative to the UN in Geneva also spoke to the president of the International Committee of the Red Cross, which is set to commence operations in Ukraine, to assist Indian nationals and escort them out of conflict zones. Shringla said India will share the main areas where Indians are located with the Red Cross to facilitate this.

A key concern for India is ensuring the safety of nationals caught up in areas that are witnessing intense fighting, including about 2,000 in the capital Kyiv, 4,000 in the eastern city of Kharkiv, and more in Sumy and Odessa.

“Unfortunately, these areas continue to be live conflict areas, and it is generally deemed unsafe for people to move around freely. We will try to find suitable evacuation modalities for [the Indians] once feasible, Shringla said.

For the moment, Indians in these conflict zones are being advised not to move around and to seek shelter in bunkers and other facilities. The Ukrainian side is attempting to provide food and water to Indians in these areas to the extent possible.

About 4,000 Indians left Ukraine before Russian President Vladimir Putin ordered a military operation in support of the breakaway regions of Donetsk and Luhansk on February 24. According to an Indian estimate, some 15,000 Indians are still in Ukraine, though many have begun moving towards the safer western region to leave via borders with Hungary, Romania, Poland and Slovakia.

Several videos emerged on social media of Indian and African students facing problems while attempting to leave through crossings on the Polish border. Shringla said that while crossings on the Hungarian and Romanian borders are operational, the exit point to Poland was “problematic” and “clogged” by hundreds of thousands of people.

The Indian side is calibrating its evacuation plan according to experiences on the ground, and there are now plans to move people stranded on the Polish border to the western Ukrainian city of Uzhhorod, which will be used as a staging point for people to take trains from nearby Chop town to the Hungarian capital of Budapest. Shringla said the trains run every two hours and the journey will take about eight hours, following which the Indians will be flown out of Budapest.

A team of Indian officials will be in place in Moldova by February 28 to help Indian nationals moving out from the southern Ukrainian city of Odessa, currently a conflict zone. Another team from the Indian embassy in Moscow has been sent to a Russian region bordering the eastern Ukrainian cities of Kharkiv and Sumy, both active conflict zones, to put in place arrangements for the possible evacuation of Indian nationals.

Indian teams have also been deployed at nine locations along the borders with Hungary, Poland, Romania and Slovakia. The Indian embassy in Kyiv is operational though “hostilities in the area are making regular activities difficult”, Shringla said.

The Indian side intended to operate 12 chartered flights between February 26 and March 2 to bring back its nationals via Hungary and Romania. Three of these flights will be via Budapest and nine via Bucharest.