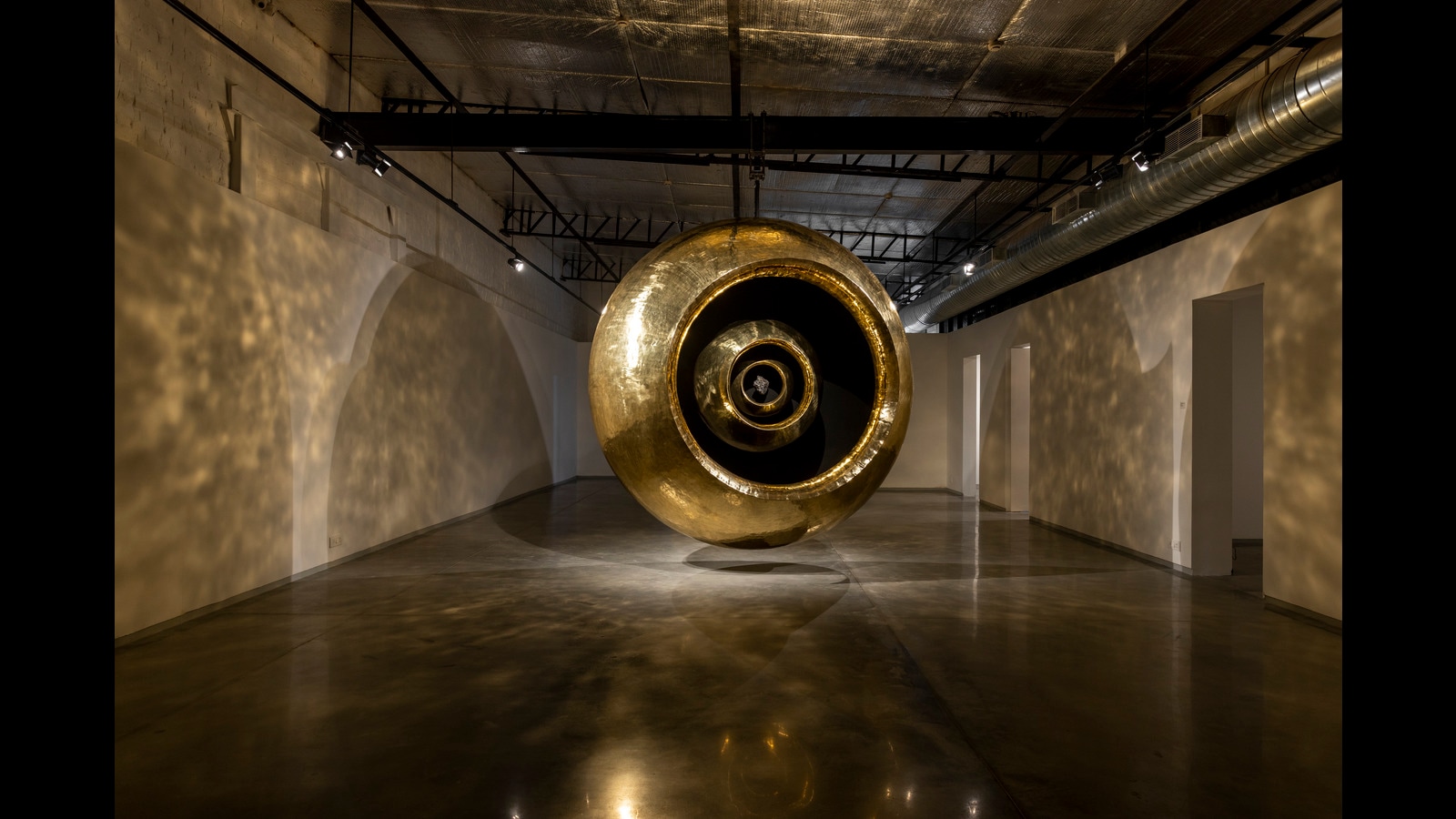 
Picture the slow rotation of a robust, spherical metal installation, weighing over 700 kilograms, suspended from the ceiling. This greets visitors as they walk into the gallery, where three major sculptural works by artist Subodh Gupta are exhibited as part of the exhibition, Cosmic Battle.

Gupta’s contemplations on the self and cosmos, and the micro and macro, take shape of his signature medium — metals such as steel and brass — in this solo show curated by Peter Nagy. “I’d been working on this piece for a very long time, since almost eight years,” says the 58-year-old artist, recalling: “We used to sleep on the rooftop in summers, with family and cousins. And my propensity was to always get up there to see what’s going, as it always interested me to know what exists beyond us. As scientists discover newer moons and planets; it’s even interesting. And I named it Cosmic Battle while I was thinking about life, good versus evil and light versus dark, and what’s happening in the world.”

He confesses how he was also influenced by the Sufi poet, Kabir. “There’s a beautiful poetry by Kabir, which goes like ‘Iss ghat baag bageeche, iss mein sirjanhara, iss ghat andar saat samandar, ismein naulakha taara….’ Here he’s talking about waves, forests, and stars, and when you look into a vessel (ghat), you see the entire universe. I’ve worked with vessels for past 30 years, and when I found this poetry, I could relate to it, and so I worked around it,” explains the Gurugram-based artist.

In the gallery’s side room, one sees his new work Self Portrait, 2022, which is a sculptural self-portrait. And Gupta says he sees a lot of himself in it. “All of my work is a self-portrait, but this one is close to me. I’ve used over 100 old utensils, which have their own marks like spoon scrapings, after years of usage. It has people’s souls in it. Just like all human palms are similar to each other, but also very different, these utensils look similar but have different stories. This is cosmic in itself. My mother used to do a spiritual puja on the utensils — with bricks, sand, mango leaves, and coconut. I’ve taken the form of the sculpture from there,” he adds informing that there are also elements of wooden railway sleepers in his work, which he borrowed from his family’s association with the railways, as employees.

“I don’t know who used these utensils. They are collected from a scrapyard, where workers would have melted them for aluminium bricks in a reincarnation of sorts. In my works too, they have found a rebirth,” he opines.

And in the third self-cast installation, titled Torso, Gupta uses his own body. He explains, “I’m a multimedia artist. I perform, click photographs, create collages, paintings, sculptures, and installations. I’ve used my body many times in my works. I even cast my body, about seven to eight years ago. In museums, sometimes ancient sculptures’ heads or limbs are missing, still we put them on the pedestal… This one has a plant on it, which is part of my imagination. Just like when you’re painting or drawing, you put textures in it.”

Among the three works, gallerist and art curator Peter Nagy picks Gupta’s Cosmic Battle as “certainly one of (his) favourite sculptures, which the artist has ever made”. Nagy adds: “It proves that sometimes the most profound artworks can also be incredibly simple.”

What: Cosmic Battle Where: Nature Morte Gallery, The Dhan Mill, Chhatarpur On till: April 10 Timing: 11am to 7pm Nearest Metro Station: Chhattarpur on the Yellow Line