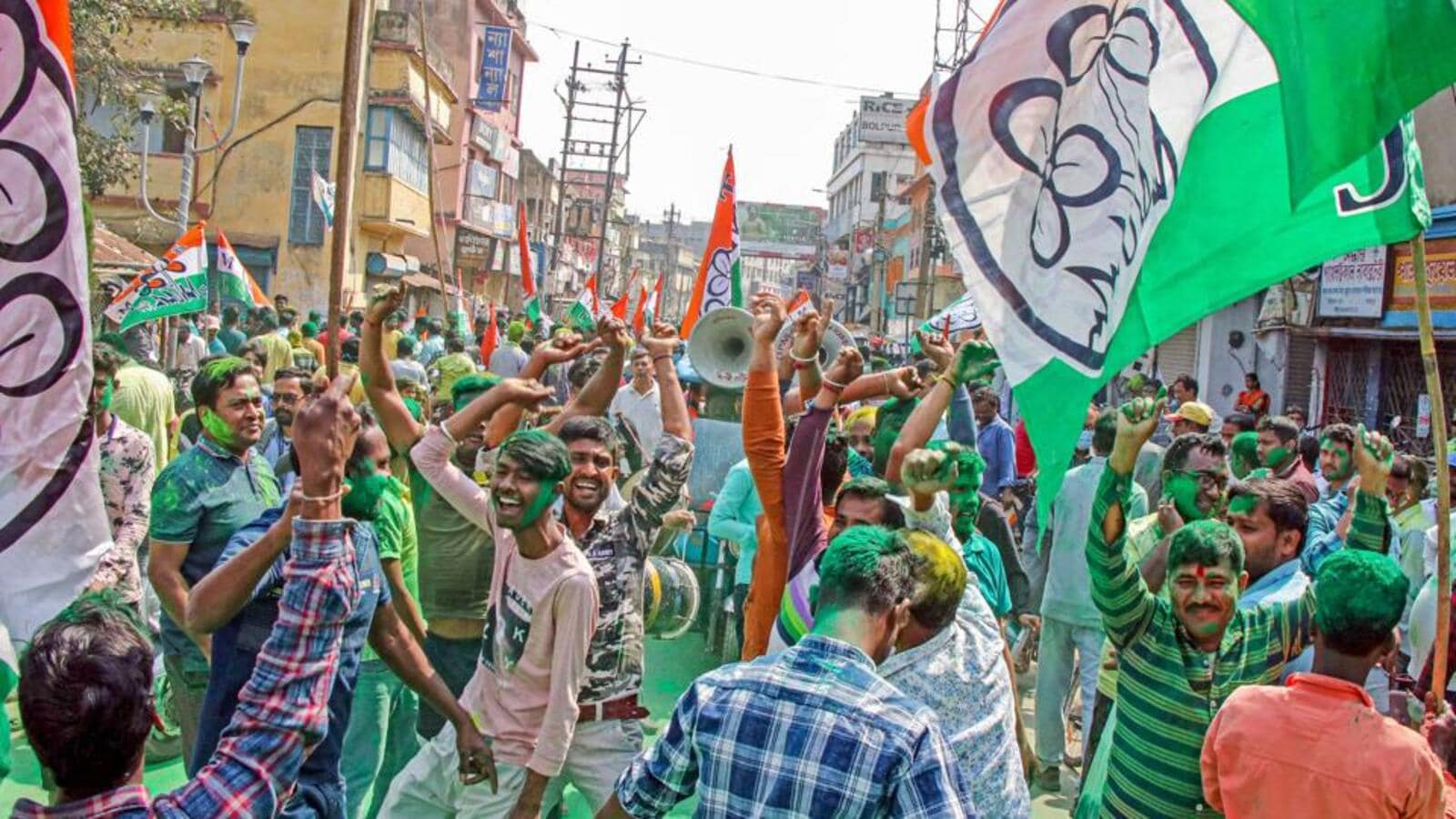 
KOLKATA: The ruling Trinamool Congress (TMC) in West Bengal swept the civic elections in the state bagging 102 out of the 108 municipalities, amidst allegations of massive violence and rigging raised by the opposition parties.

“Heart-felt gratitude to Ma-Mati-Manush for according yet another overwhelming mandate to us. Congratulations to the winning candidates of All India Trinamool Congress in the Municipal Elections. Let victory enhance our responsibility and dedication. Let triumph impart humility. Let us together work for peace, prosperity and development of the state,” Mamata Banerjee, TMC supremo and West Bengal chief minister, tweeted as the results started pouring in.

While the Communist Party of India (Marxist), or CPI(M), won the Taherpur municipality in Nadia district, the newly launched Hamro Party won the Darjeeling civic body. The Bharatiya Janata Party (BJP), which won 77 seats in the state assembly elections in May 2021, couldn’t win a single civic body.

The BJP lost in four municipalities – Kharagpur in West Midnapore, Contai in East Midnapore, Bhatpara in North 24 Parganas and Balurghat in South Dinajpur – considered to be saffron bastions and hometown of some of the party’s most prominent faces. Out of the 6 BJP legislators who contested the civic polls, 4 have lost.

The BJP lost in Kharagpur from where the party’s national vice president Dilip Ghosh won in 2016. The party retained the seat in 2021 as well. The party also lost at Contai, which was considered to be a strong hold of the Adhikari family, the members of which joined the BJP ahead of the assembly polls. Suvendu Adhikari, is a BJP legislator and the leader of the opposition in the state Legislative Assembly.

“We are not accepting this mandate. Free and fair polls are not possible in West Bengal. But as we have faith on the democratic process we participated in the elections. The results will not have any effect on our organisation set up and preparedness,” said Samik Bhattacharya, BJP spokesperson in West Bengal.

While the TMC won the Dinhata municipality in north Bengal uncontested, the opposition could not win a single seat in at least 30 civic bodies. There was a hung house in 4 civic bodies.

“In democracy it is always good to have an opposition. But what can the TMC do if the voters reject the opposition? We cannot force the people to vote for the opposition,” said Debasish Kumar, TMC legislator.

The TMC even managed to snatch the Berhampore municipality, which has remained a Congress citadel for almost two decades and the stronghold of West Bengal Congress chief Adhir Ranjan Choudhury.

“Congress candidates were threatened and kidnapped. The TMC used the police. 5 seats went uncontested. Even if a mock election is held now in a free and fair manner, the Congress would win in all the 28 seats of the municipality. We knew that the TMC would win in many civic bodies but we expected that the TMC supremo would at least allow the elections to be held in a free and fair manner. But it seems that she is not being able to discard old habits of unleashing violence,” said Choudhury.

This comes just days after the TMC bagged four municipal corporations – Asansol, Bidhannagar, Chandannagar and Siliguri – which went to polls on February 12. Earlier in December 2021, the TMC swept the Kolkata Municipal Corporation, winning 134 out of 144 wards. As of now elections are due in only one corporation – Howrah Municipal Corporation.

“I salute the voters of Taherpur for standing up against the terror unleashed by the TMC. The results prove that TMC is losing ground and that’s why they resorted to violence. People are losing faith on the BJP and the Left is emerging as a power,” said Sujan Chakraborty, CPIM leader.