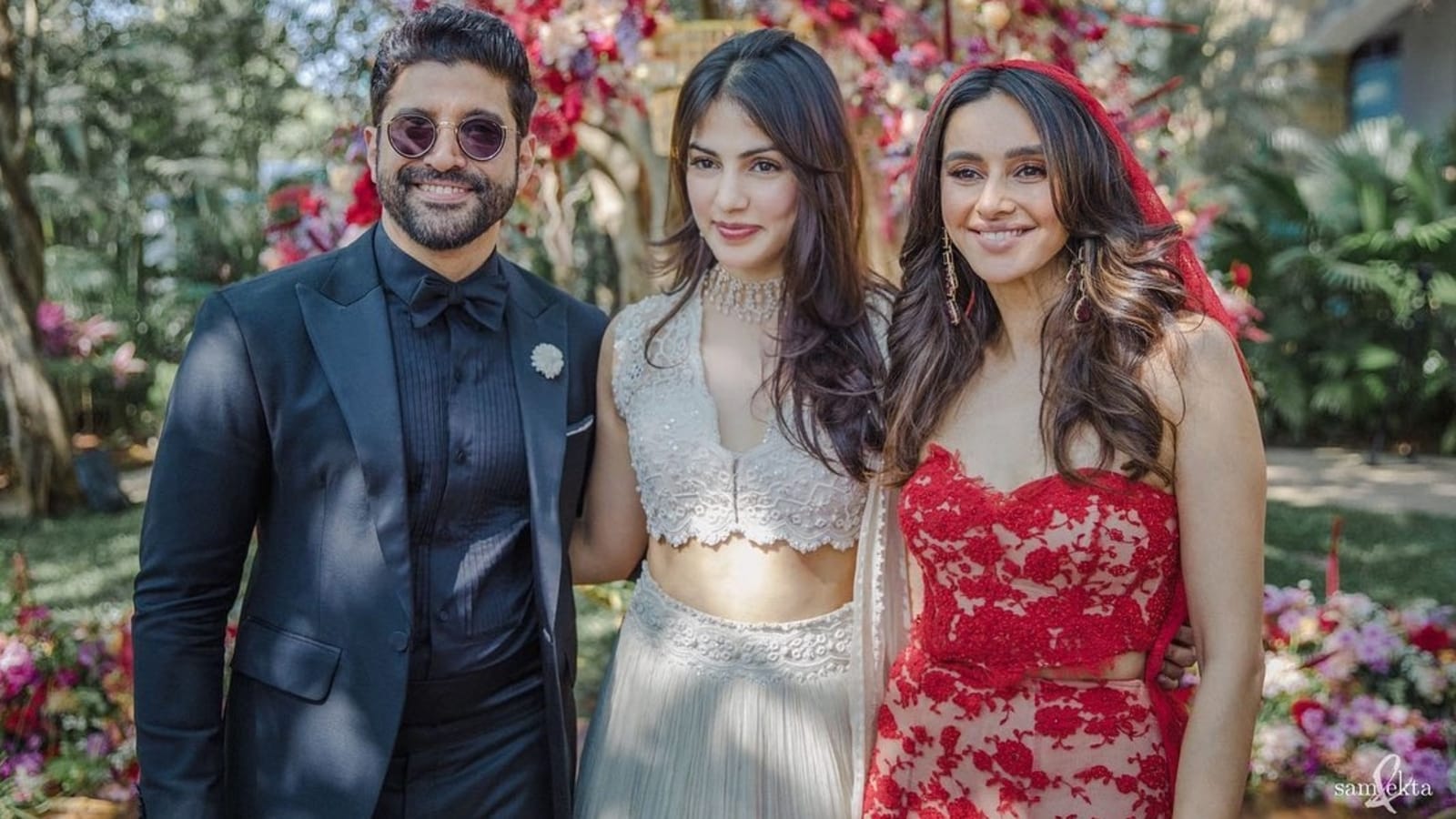 
Actor Rhea Chakraborty on Sunday evening shared several unseen pictures from the wedding ceremonies of filmmaker-actor Farhan Akhtar and his wife, television personality Shibani Dandekar. Taking to Instagram, Rhea posted the photos as she posed with the newlyweds as well as exclusively with the bride. The first picture was from Farhan and Shibani’s wedding day in which Rhea posed with the couple as they all smiled for the camera. For the occasion, she wore a beige lehenga and accessorised with jewellery. Also Read | Shibani Dandekar, Farhan Akhtar’s wedding festivities: Anusha Dandekar, Rhea Chakraborty dance to Mehendi Laga Ke Rakhna

In the second candid photo, Shibani Dandekar and Rhea Chakraborty were seen smiling as they sat outdoors next to each other. The photo was clicked at Shibani and Farhan’s mehendi ceremony. For the event, Rhea wore a yellow coloured lehenga and kept her hair loose.

In the last photo, both of them were seen laughing as Rhea held Shibani. It was taken at the same event, later in the evening. Sharing the pictures, Rhea captioned it, “Mr and Mrs Akhtar. Love is contagious, thank you for spreading so much love on your special day.”

She added, “@shibanidandekar you make the most beautiful bride in the world, I love you to the moon and back. @faroutakhtar she’s your problem now, all the best, lots of love. #fairytalesdocometrue @sam_and_ekta thank you for capturing these amazing memories.”

Farhan and Shibani tied the knot at Farhan’s family farmhouse in Khandala on February 19. It was followed by a civil marriage that took place on February 21. Their wedding was attended by several celebrities including Farah Khan, Satish Shah, Ashutosh Gowariker and Ritesh Sidwani. Hrithik Roshan also attended the wedding with his parents, Rakesh and Pinkie Roshan. The couple had been dating for almost three years.

Earlier, Rhea had shared pictures of herself on Instagram from the wedding festivities.

Sharing photos from the mehendi ceremony, Rhea had written, “Some time or the other, somewhere somehow, She finally learnt how to live in the now. -RC #rhenew.” Sharing a candid photo taken on the wedding day, Rhea had captioned the post, “Sunshine and smiles. #rhenew.”

Rhea was last seen in the Rumy Jafry directorial, Chehre, which also featured Amitabh Bachchan and Emraan Hashmi among others.