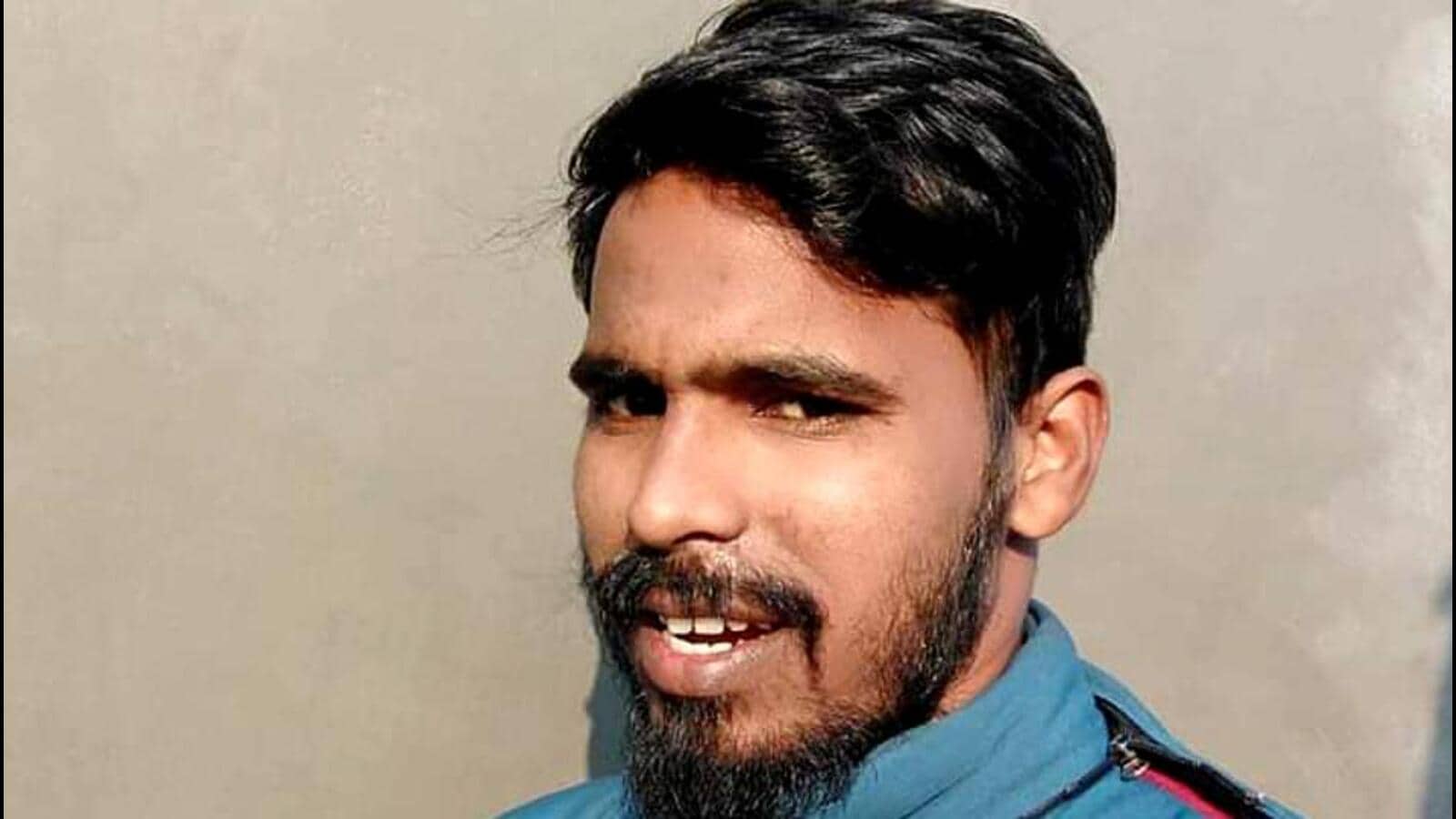 
A week after 27-year-old student leader Anis Khan died of a fall from the roof of his two-storey home at the Dakshin Khan Para neighbourhood of Sarda village in the Amta assembly constituency of Howrah district, his family and neighbours continue to suspect the involvement of local politicians and police.

Salem Khan, father of the former student of Kolkata’s Aliah University, alleged that Anis was thrown off the roof by three civic police volunteers, who ran up the stairs soon after he opened the main gate on hearing them knock at 1.10am on February 19.

While talking to HT on Friday, several residents of the Muslim-dominated neighbourhood alleged that Anis became a target of some Trinamool Congress (TMC) leaders after he shifted allegiance from the Student’s Federation of India, an arm of the Communist Party of India (Marxist), or CPI(M), to the Indian Secular Front (ISF) launched by cleric Pirzada Abbasuddin Siddiqui of the famous Furfura Sharif shrine in Hooghly district prior to the March-April 2021 assembly polls.

Although the CPI(M) contested the polls with the Congress and ISF as its allies, only the newborn party managed to win a seat in West Bengal by defeating the TMC at Bhangar in North 24 Parganas district. The TMC won in 213 seats and the Bharatiya Janata Party (BJP) wrested 77, while the CPI(M) and Congress ended with no legislators in the assembly for the first time since Independence.

At Amta, where the TMC won for the first time, the BJP came second. The seat earlier belonged to the Congress.

“Anis organised a blood donation camp in May last year despite warnings from some local TMC leaders, who accused him of influencing voters against the TMC. Some people stormed his house and vandalized property. Anis lodged a complaint not only with the local police but the district magistrate as well,” said one of his relatives, who did not want to be identified.

A number villagers alleged that Anis drew the ire of some policemen in recent years for raising his voice against whatever he perceived to be unfair. These, they said, included activities of some private nursing homes at Amta during the Covid-19 pandemic. “Anis was always there to help others,” said one of his neighbours, also declining to be named.

The villagers said a quarrel Anis had with some civic police volunteers at an Islamic religious programme (referred to as a jalsa) hours before his death might have acted as a flashpoint. The jalsa was addressed by a cleric from Furfura Sharif.

“The quarrel started when one of the civic police volunteers asked Anis why so many people had gathered violating pandemic restrictions. Anis countered them asking what were so many policemen doing at a religious programme,” a villager, who was present at the spot, said on condition of anonymity.

Anis reportedly returned home around 12.30am while the jalsa continued. His father, however, could not confirm the exact time, saying he had gone to bed by then.

“The men came looking for Anis, saying he was wanted for questioning in a 2017 case that was registered against him at the district’s Bagnan police station under the Protection of Children from Sexual Offences (POCSO) Act,” Salem Khan said.

Located around 60km from Kolkata, Sarda village is under the jurisdiction of Amta police station, where a second case against Anis was registered two years ago. Anis obtained bail from the court in both cases and filed counter complaints, villagers said.

“I was waiting at the door with the fourth man, who was dressed in police uniform and carried a rifle,” Salem Khan said on Friday after failing to identify Amta police station’s home guard Kashinath Bera and civic police volunteer Pritam Bhattacharya, who were arrested on Wednesday by the special investigation team (SIT) that chief minister Mamata Banerjee formed on February 21 amid statewide agitation and social media debate.

After the arrests, Banerjee, who is also in-charge of the home department, said: “I do not know if the charges will be proved in court, but the two men have been taken into custody so that they cannot influence the investigation. We want an impartial investigation so that the truth is revealed. I do not want to interfere in any impartial investigation. It is being done because allegations have been raised against the police department. The government is very tough. Law will follow its own course.”

As an eerie calm stalked Sarda, an otherwise peaceful village inhabited by Muslims and Hindus, members of the Khan family and local residents said they had reasons to believe that Anis was being watched from the evening of February 18 till the alleged attack past midnight.

“The four men who came to our house seemed to have monitored my brother’s movements. When my father told them that he was not sure if Anis was at home, one of them said he had returned half an hour earlier. How could they know this? They also rushed straight to the roof, as if they were aware that he was there,” said Sabir Khan, the victim’s elder brother.

“Some local youths later showed me a spot beside the adjacent pond from where one can spot a person on our roof especially, if he uses a mobile phone at night,” he said. “Anis was probably using his phone.”

Salem Khan alleged during a protest outside Amta police station on Thursday that TMC’s Amta legislator, Sukanta Paul, should be arrested.

“The investigation will be fruitless unless the local MLA and some TMC panchayat members are arrested,” he said in public. The villagers widely shared a photograph from arrested civic police volunteer Pritam Bhattacharya’s social media page, in which he could be seen posing with the legislator.

Paul argued that being a people’s representative, he visits numerous places and it was not possible for him to know who he is being photographed with.

“I visit so many places. How can I know whether someone standing beside me is a criminal or a saint? I have no personal enmity with anyone at Sarda. In fact, I didn’t even campaign there during the assembly polls,” Paul told HT. “We, too, want the real culprits to be arrested. Let the SIT conduct its probe as directed by the high court. I met the villagers after the incident and expressed my condolences. I have faith in the law.”

Two Amta police station personnel, sub-inspector Nirmal Das and home guard Jitendra Hembram, who were on duty on the night of the alleged murder, have been suspended, but the villagers have raised questions on the role of some more civic police volunteers. One of them, they alleged, is a relative of a TMC leader.

While being taken to court on Thursday, Bera and Bhattacharya alleged before the media that they were made scapegoats. They claimed to have worked under orders from the officer-in-charge of Amta police station, but maintained that they did not know how Anis died.

Hours later, the officer-in-charge, Debabrata Chakraborty, was sent on leave for an indefinite period after he was questioned twice by the SIT headed by director general of police Manoj Malviya.

Salem Khan, whose appeal for a probe by the Central Bureau of Investigation (CBI) was not accepted by the Calcutta high court on Thursday, was taken to the Uluberia jail on Friday afternoon for a test identification parade, where Bera and Bhattacharya were brought before him, as ordered by the court.

“I can identify the man who was wearing police uniform. He was standing in front of me. But he was not arrested. How can I identify those whose faces I could not see clearly?” asked Khan, who also handed over his son’s phone to the SIT, complying with the court’s order.

No officer from the Amta and Bagnan police stations were ready to comment on the allegations.

Salem Khan also agreed to let the SIT exhume his son’s body for a second postmortem that the Calcutta high court ordered after hearing the state’s appeal. It was scheduled to be done on Sunday.

“Investigation of Anis Khan murder for proper justice has been speedily done. All angles are being looked into by the SIT. As of now two police personnel have been taken into custody. Request members of public and family members of Anish Khan to have faith in West Bengal Police and to cooperate with the Special Investigation Team which is set up to ensure proper and speedy justice,” the state police said on social media on Thursday.

This, however, did not deter the opposition from targeting the TMC, which secured the support of a majority of the Muslims in all polls since coming to power for the first time in 2011. The community comprises around 30% of West Bengal’s population.

“More than 20 agitations have been held in Kolkata and the districts this week. There will be more,” said Mayukh Biswas, national general secretary of the SFI.

Anis, according to friends and family, played a noteworthy role in the movement against the Citizenship Amendment Act, which became a raging issue among Muslim voters last year, and a weapon for Mamata Banerjee against the saffron camp. Yet, BJP leaders took potshots at the chief minister, saying the death exposed lawlessness in Bengal.