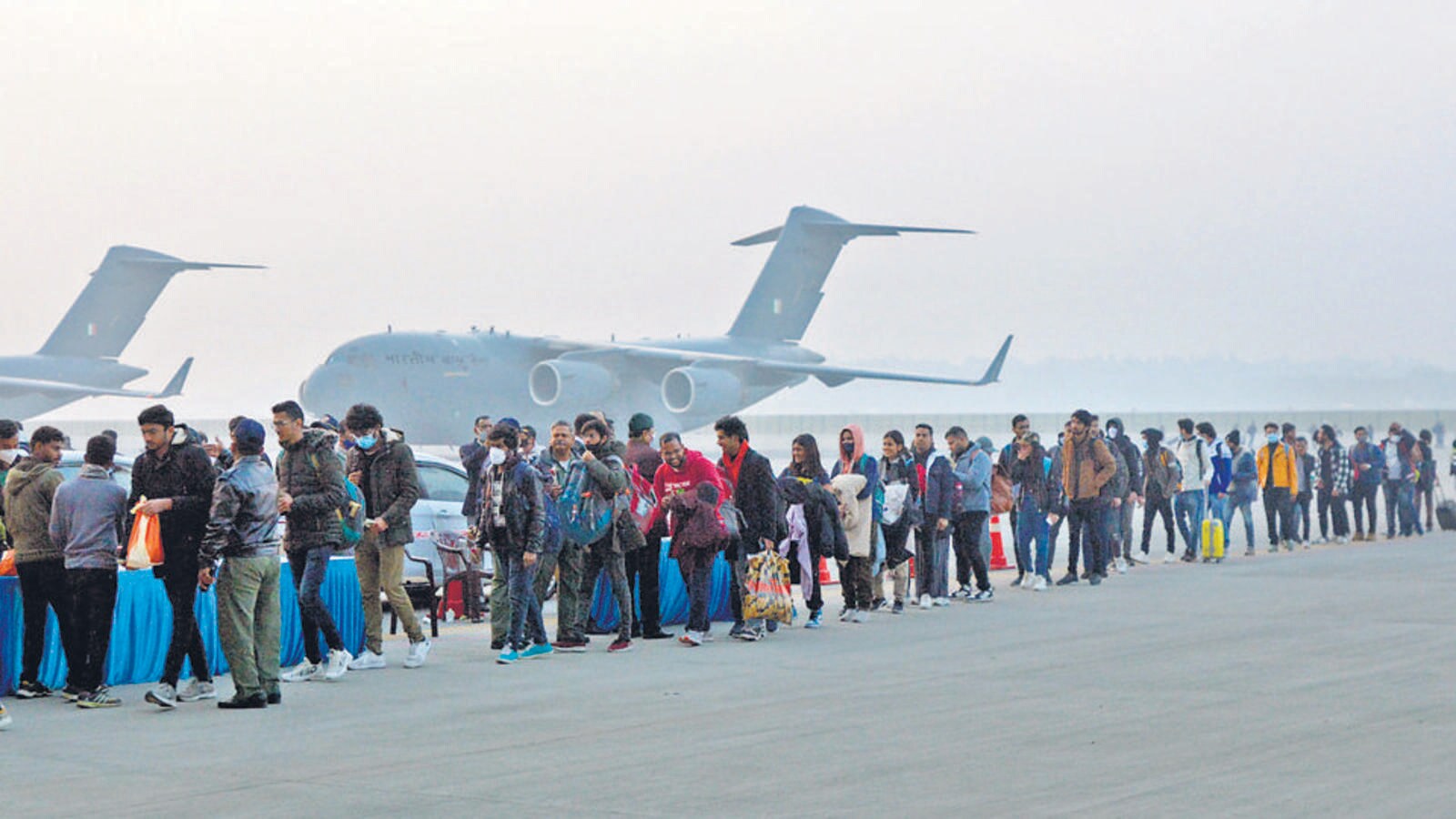 
India on Friday urged Russia and Ukraine to declare a ceasefire in conflict zones so that it could pull out nearly 3,000 Indian citizens, especially from the eastern Ukrainian cities of Kharkiv and Sumy, where movement is impossible because of shelling and intense fighting.

More than 20,000 Indians have so far left Ukraine since India initially issued advisories last month before the Russian invasion, and close to 10,400 people have been brought back in 48 evacuation flights. Officials said it was now clear the total number of Indians in Ukraine was more than the 20,000 citizens who had registered with the embassy in Kyiv when tensions flared.

The government’s “primary focus” now is getting Indians still caught in conflict zones in eastern Ukraine out in a safe and secure manner, external affairs ministry spokesperson Arindam Bagchi told a media briefing.

This includes an estimated 300 Indians in Kharkiv, more than 700 in Sumy and about 1,000 more in Pisochyn, a village in a relatively safe area some 10 km from Kharkiv. There are also hundreds more in nearby areas, and the main difficulty faced by the Indian side is movement through regions witnessing active fighting.

“Ideally we would need to have (a) local ceasefire or something of that kind,” Bagchi said, adding it would be difficult to move people out without a truce because of the shelling and fighting.

“We don’t want the students to cross through a place where they are at risk. Anything can happen in a war zone, so we always want a safe route for our students. We have told both sides publicly that there should be a local ceasefire so we can get our students out,” he added.

Indian officials managed to get dozens of students out of Pisochyn in five buses on Thursday and Friday and they were taken to Lviv and the Moldovan border. More buses are being arranged, though there is a shortage of drivers and fuel.

Students in Sumy and Pisochyn, who posted several videos on social media, said shelling was continuing in the area and they were facing a severe shortage of food and food. Some spoke about having nothing to eat for more than a day and being unable to sleep because of the shelling.

Though Russian media reports suggested Russian authorities had arranged 130 buses to take Indians from Kharkiv and Sumy to the Russian town of Belgorod, Bagchi said these vehicles were 50 to 60 km away from where the students are sheltering. “We don’t see a safe and secure way to reach (the buses). I would appeal and urge the parties concerned to have a local ceasefire so that we can go to those buses…,” he said.

Ideally, he said, the Russians should come to the students with the buses. He added the Indian side had also not seen anything on the ground regarding the creation of humanitarian corridors that Russia and Ukraine had agreed on during talks on Thursday.

Bagchi said Indian student Harjot Singh, who sustained bullet wounds in Kyiv, is safe and convalescing in hospital. The Indian side will pay for his treatment and is ascertaining his exact location so that he can be evacuated.

Singh, a resident of Delhi, told the media he was hit by three bullets when he was caught in a crossfire while trying to flee Kyiv on February 27. He regained consciousness in hospital on March 2 after undergoing surgery but is unable to walk as he was shot in the knee and leg.

He also rejected Russian President Vladimir Putin’s repeated assertion that thousands of Indians had been taken hostage in conflict zones. “We are not aware of any Indian being held hostage,” he said.

Bagchi said 4,000 Indians had returned on 18 evacuation flights since Thursday, and 16 more flights were scheduled for Friday and Saturday, including four by the Indian Air Force’s C-17 heavy lift aircraft. Bratislava in Slovakia was on Friday added to the locations in Ukraine’s neighbouring countries for evacuation fights.

“The flights will continue till we manage to get everybody out,” he said.

India also sent three tranches of humanitarian assistance to Ukraine on Friday. A total of 23 tonnes of medicines, medical equipment and relief materials are being delivered via Romania, Slovakia and Poland on the C-17 aircraft.